Cooking a brisket can be a challenging feat for first timers and experienced brisket smokers alike. After all, there are so many steps to smoke a brisket perfectly and so many ways in which it can go wrong can that it really feels like you’ve accomplished a mission when you have a perfectly smoked brisket in your hands.

One of the most common questions that barbeque lovers ask is whether the brisket should be cooked fat side up or down. This is one question that has probably been doing the rounds since the time a BBQ was first set up to cook a brisket and there has not been a final consensus on this point till date. So, if too have this question in mind, read on to find out the answer to this centuries old question which can make all the difference between a good and a perfectly smoked brisket.

What Is It All About?

If you have ever smoked or even seen a brisket cooking in a barbeque, you would know that it has two distinct sides.

Should You Cook The Brisket Fat Side Up?

A lot of people prefer to cook their brisket fat side up as they believe that when the brisket heats up and goes tender, the fat will melt and fall back into the meat making it juicier and more succulent. However, this is actually a wrong assumption and a myth. 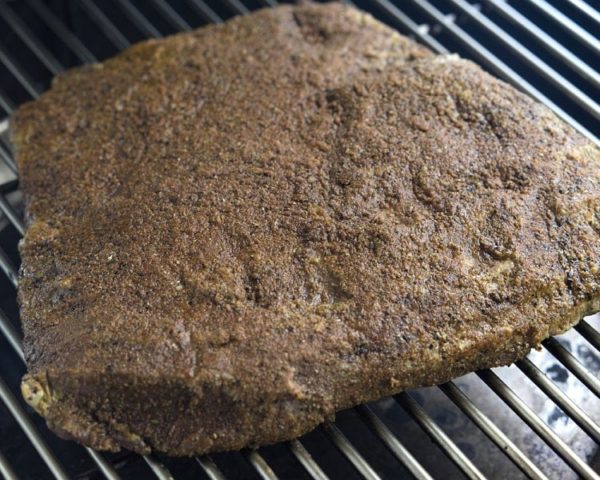 The fat does melt from the heat but if the fat side has been kept up, the fat will simply run down the sides of the meat and go into the dripping pan. This means that you not only lose the good fat of the meat leaving it dry, it can even take away the seasoning you have put in the meat.

Moreover, this kind of brisket which is all runny with fat does not look as tempting as a brisket which goes all smokey and crisp with a uniform bark when the lean side is kept up.

The only way around these problems of smoking a brisket fat side up is if you have a horizontal off-set smoker through which you can direct the heat to come from above rather than from below. What you must keep in mind to get a perfectly smoked brisket is that the fat side should always face the heat.

What Happens When You Cook The Brisket Fat Side Down?

Where is The Heat Coming From?

Most of the traditional barbeque grills and smokers are designed to produce heat from below. However, there are some cookers such as the horizontal off-set grill and cooker where the heat is generated from top.

What Do Brisket Smoking Experts Say About This?

It really does not matter which way you have been smoking the brisket up till now because you will find advocates for both the sides among brisket smoking experts. There are many professional barbeque champions who swear by smoking a brisket fat side up while a good many claim to have gotten prize winning briskets by smoking it fat side down.

Actually, when you know that a large part of the decision making process of smoking a brisket fat up or down depends on what kind of cooker you are using, it makes it much easier to understand others’ choices too.

For example, here is what Malcom Reed has said about his brisket smoking recipe: 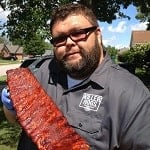 At a contest, I would cook brisket fat side down the entire time. But you have to remember with my competition briskets I’ve trimmed off most of the fat, and I’ve injected it with at least 16oz of liquid….

For this “Eating Brisket,” we’re not worried about the extra fat or what it looks like after it’s cooked, so I’m going to cook it fat side up the entire time.

I want the final product to have a “beefy” flavor but not be enhanced or artificial.

However, Malcolm Reed uses a horizontal off-set cooker for his eating brisket recipe which means that the heat comes from above rather than below. Therefore, it makes sense for him to cook the brisket fat side up so that the fat side is in direct contact with the heat.

Similarly, if you look at the brisket smoking recipe followed by Aaron Franklin, you will easily be able to understand that he too went for a brisket cooker which has the heat source from above and therefore, he chose to cook his brisket fat side up.

An additional advantage to cooking the brisket with the fat side facing the heat is, of course, the flavour that it adds to the meat when the fat drips down on to the coals. Meathead Goldwyn, of amazingribs.com, says:

And what about the fat dripping into the fire and being resurrected as flavorful droplets mixed in with smoke? I save the fat cap and put it on the grate over the fire and let it drip away.

When the fat drips down onto the coals which are glowing with heat, it sizzles and burns to produce a unique kind of smoke which rises up to infuse the meat with the smokey flavour that the brisket is known for. Even if you are using a cooker which has the heat source from above, you can save the fat cap as Goldwyn has suggested and use it to actually produce that flavourful smoke which can make the brisket even more delicious.

Wrapping It Up – Which Way is better?

The long and short of the debate on whether it is better to cook a brisket fat side up or down is that it all depends on the kind of cooker you are using for smoking the brisket. It is a well-established fact that has also been confirmed by professionals around the world that a perfectly smoked brisket is one that has been cooked with the fat side facing the heat.

The myth that the melting fat is absorbed back into the meat is completely false as there is no way that any kind of meat can absorb any fat that is applied to it from the surface. On the other hand, the fat that melts from under the meat actually serves to provide a better smokey flavour to the meat when it falls on the burning coals. The insulation that the fat provides between the meat and the fire also helps in retaining its moisture. You can even try inserting a fat cap in between the meat and fire to collect the dripping fat which can then be used to sprinkle on the coals to infuse the meat with the smokey flavour.

Moreover, if you cook the brisket with the fat side away from the heat, it will just result in you getting a brisket with a top layer of runny fat which just looks very unappetizing. You wouldn’t want to ruin your appetite for a good smoked brisket just because it doesn’t look very appealing due to the wrong technique used in smoking it, would you?

Moreover, by cooking the brisket with the fat side towards the heat also ensures that the brisket is juicier, tender and with a uniform lean bark side that will leave you hungrily devouring your flavourful and perfectly smoked brisket.

Do let us know what you think about our tips on smoking the brisket. You are most welcome to share any other suggestions on this topic too which can make it even more helpful for brisket smokers to cook a perfect brisket.