With the recent explosion in smart technology, we’re becoming increasingly connecting to gadgets and appliances that can be controlled from afar. Thanks to WiFi enabled products, it’s possible to turn off the kitchen light from the highway, lower the heat while sitting at work, or monitor your house during vacation. The wave of connected products has even made its way to the backyard, where WiFi grills are providing unprecedented control and unlimited freedom.

Wireless gadgets aren’t new to BBQ. For some time, wireless thermometers have offered the ability to remotely monitor food and cooking temperatures. But WiFi grilling takes it a step further, not only providing better range and reliability to monitor temps, but actually allowing you to control your cook from afar—you can raise and lower the temperature without being anywhere near your grill.

Whether you prefer to cook with wood pellets, charcoal, or gas, there are now WiFi grill options that make it possible to BBQ while you cut the grass, watch the game in the basement, or take a nap on the couch.

👀 See it on Amazon

👀 See it on Amazon

Pellet grills are by nature tech products. They operate on a digital controller that provides set-it and forget-it automation, and utilize sophisticated sensors and advanced algorithms for precise temperature control. Their digital DNA makes them a natural fit for hi-tech features like programmable probes and WiFi. Consequently, there are more WiFi pellet grill options than any other type of backyard cooker. 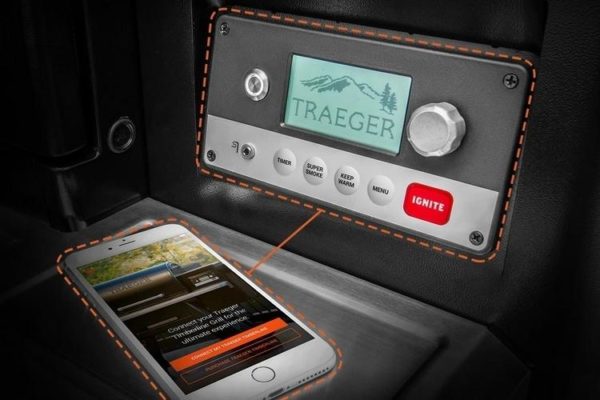 Although WiFi has yet to become standard, there are a few brands that have made it an option. Mak has had a WiFi add-on since 2013, while Green Mountain began offering it as an upgrade on its models in 2014 (both brands previously had Bluetooth remote control options). Both brands allow you to connect to the grill in one of two ways: point-to-point, with the grill serving as a WiFi hotspot—which is the easier setup but offers limited range—or through your home network, which extends the range to that of your WiFi signal.

In 2016 Memphis Grills upped the ante on WiFi pellet grills by outfitting all of its models with cloud-based wifi. A more sophisticated platform, with cloud-based WiFi you’re not limited to the range of your home network—you can control the grill from anywhere you have internet access, even if it’s a 3G or 4G cellular connection. In 2017 Traeger released it’s own cloud-based pellet grill, the Traeger Timberline, which features their new WiFire controller. At $1700 (for the smaller version), the Timberline is a fairly big investment, but the belief is that Traeger will offer the WiFire on some its other pellet grills in the near future.

Given the growing number of WiFi pellet grills, and the fact that Traeger, the biggest name in the market, has developed a WiFi controller, it seems likely that WiFi will soon be a fairly standard feature on pellet grills. Those brands that aren’t already developing a WiFi-enabled controller will be forced to in order to keep pace with the competition. It also seems likely there will eventually be a generic WiFi controller that can be retrofitted on almsot any pellet grill to provide wireless control.

It might seem counter-intuitive, since charcoal is viewed as back-to-basics cooking, but charcoal grills and smokers have had a WiFi option longer than any other backyard cooker.

BBQ Guru had already been making automatic temperature controllers for smokers for a few years when they released the WiFi-enabled CyberQ in 2012. Like its predecessors, the CyberQ automatically controlled airflow to maintain the desired temperature. However, it could do it via a WiFi connection. At the time of its release, the CyberQ was cutting edge, allowing you to connect through ad hoc mode (directly to the CyberQ’s controller) or infrastructure mode (through your home router).

The CyberQ was a truly innovative product. However, BBQ Guru has done little to update the CyberQ since its release, and by today’s standards connecting to WiFi is overly-complicated. Seeing an opportunity, in 2014 Flame Boss launched its own automatic temperature controllers, including the Flame Boss 200-WiFi (it has since been updated to the Flame Boss 300 WiFi). It built on the success of the CyberQ, but featured tighter temperature control, improved interface, and simple WiFi connectivity that even a tech novice can handle. They also enhanced its WiFi capabilities, making it compatible with Amazon’s Alexa, so you can control your cook wirelessly and by voice command.

Despite being the most popular type of backyard grill, and the one with the most options available to customers, gas grills have lagged behind in the development of WiFi-enabled models. There are very few on the market, and the ones that are available, like the Lynx Smart Series, are high-end models priced beyond the means of the average griller (they start at $6,000). However, with Char-Broil releasing its Smartchef Gas Grill in 2017, that may be on the cusp of changing. At $799, the Smartchef costs more than a basic gas grill, but is priced affordably enough to attract attention from the everyday shopper.

In all likelihood, the Char-Broil Smartchef will prove a precursor, the first of many WiFi gas grills aimed at the average person. Although they’re a step behind, Weber’s launch of the Genesis 2 with iGrill Bluetooth connectivity indicates they believe the future grill will be smart and connected.

The App Makes (or Breaks) a WiFi Grill

WiFi isn’t just about the ability to connect to your grill wirelessly. The user experience is equally important. A major component of any WiFi grill is the app that’s used to connect your phone/tablet to the grill. It’s how you connect, control, and interact with the grill.

You might think that developing an app is the easy part of making a WiFi grill, but it requires a lot of time, effort, and money, and how well it works can mean the difference between users loving and valuing the WiFi experience or viewing it as a useless waste of money.

While the technology itself is cool, WiFi grills do come with concerns, namely the safety of operating a hot, unsupervised grill from afar. Some manufacturers have already partially answered those concerns by designing WiFi grills that cannot be started remotely, but instead require you to be present to ignite the fire.